Two exclusively selected foals will be available for purchase in the evening’s silent auction where 5% of the winning bid will be donated to SWB Warm Hearts; a fundraiser for the Crown Princess Victoria’s Foundation. The foals will serve as a sneak peek into the upcoming Elite auctions this October during the SWB Equestrian Weeks in Flyinge.

With Patrik Kittel’s international star Deja’s sister as the dam and international top bloodlines for dressage from the sire – this filly is the Secret to success!

The sire; Secret by Sezuan has created tremendous interest. He was the top stallion at the 14-day test scoring a total of 9,5, awarded 10’s for his canter and rideability. Secret is selected to represent Germany at the World Young Horse Championships in Ermelo 2019. The damsire Zuidenwind is a winner both in the breeding shed and in competition having produced many successful offspring all the while competing successfully under Rose Mathisen. The duo is a member of Team Sweden in dressage and has a plethora of international success in the show ring.

The damsire Don Schufro has ranked at the top as a sire in his breeding index for dressage a whopping ten times! Among his most famous offspring is Weihegold, famous under rider Isabell Werth where they won gold in the Olympic Games in Rio 2016 and the World Equestrian Games in Tryon 2018. The damsire’s sire Amiral (SWB) competed in international dressage under Pether Markne and Kyra Kyrklund.

Grace is the fourth generation of fillies/mares, generations laced with diplomas, three-star performance and elite mares owned and bred by Marie Haward. Marie’s farm is in Smygehamn and guess what! The hidden gem Devon (SWB) born 2016, Deja’s full brother has not left home yet. 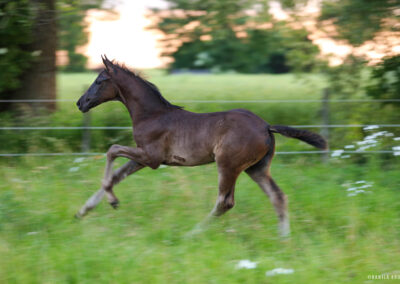 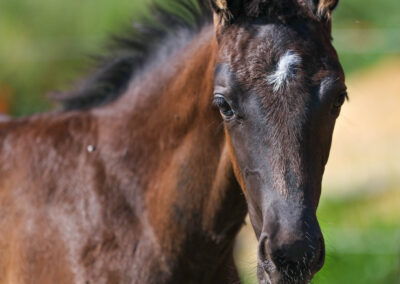 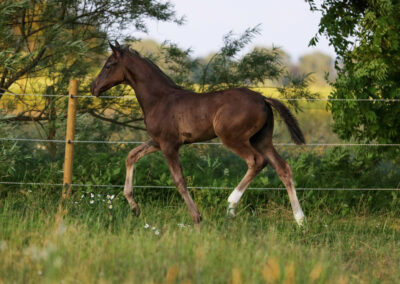 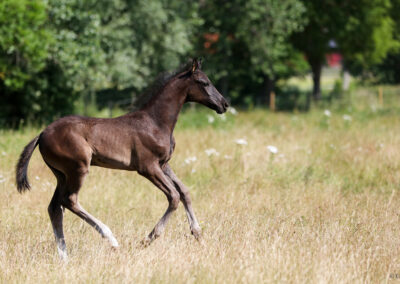 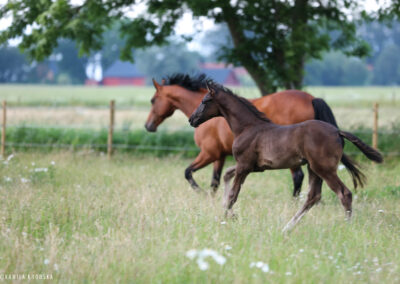 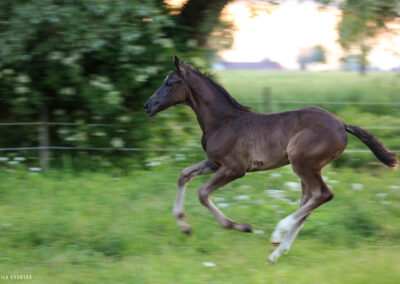 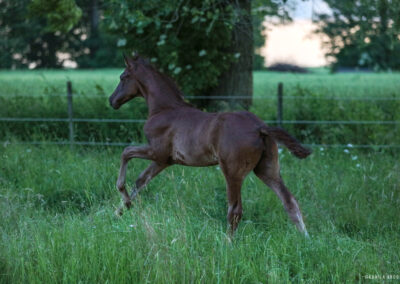 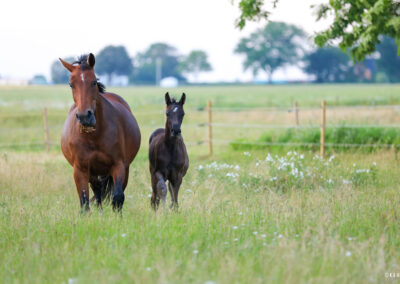 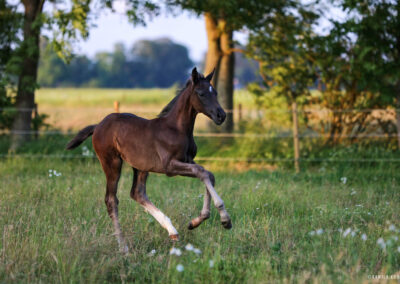 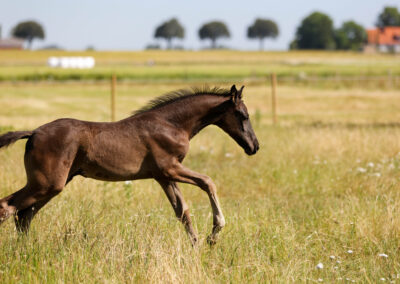 S-class merits and the top sire Kannan from the dam paired with the world – renowned Cornet Obolensky – this filly is bound for future stardom in showjumping!

The dam Chakan is six years old and was purchased for breeding merely due to her unique and coveted high-performance pedigree. Since then she has produced two offspring.  The granddam Chanel v/t Nieuwenhof Z had string of success in 1,50 showjumping and competed in the World Young Horse Championships as a 7- year old.  She also produced an offspring that sold at the Equestrian Elite auction 2017. The dam’s sister produced an offspring competing in 1, 35 m.

The sire Cornet Obolensky has a plethora of victories and placings in international showjumping under Marco Kutscher. The dup has victories in World Cup showjumping and represented Germany at the 2008 Olympic Games in Tokyo. In 2011 they were part of the gold medal winning team at the European Championships in Madrid. As a sire he is hard to beat with more than 60 approved sons and more than 300 offspring competing at S-level showjumping. His offspring have brought in more than eight million euro in prize money. The damsire Kannan is one of the top stallions in the world producing jumping horses of the highest level. The damsire’s sire Cumano, World Equestrian Games gold medal winner produced offspring that are extremely successful. King of Diamonds was ranked at nr 7 in the world of the stallion ranking in showjumping 1990-95 and dominated the Irish Studbook for many years.

The foals are named for plants and spices using either Latin or Swedish names following the alphabet. The idea came from Therese who owned and ran a commercial garden for many years. We have produced horses that participated in the SWB foal championship, Breeders Trophy, Falsterbo Horse Show, Swedish Championships in showjumping, World Young Horse Championships in eventing, SWB Elite Foal Auction and Swedish Select Horse Sales jumping horse auction. Several horses have been exported. We have been breeding horses since 2000.

Some of our customers are Linda Algotsson, Ludo Philippaerts, Hallundbaek, Charlotte Haid Bondergaard and Filip Ågren to name a few.

We are expecting the following foals next year and they will be for sale: 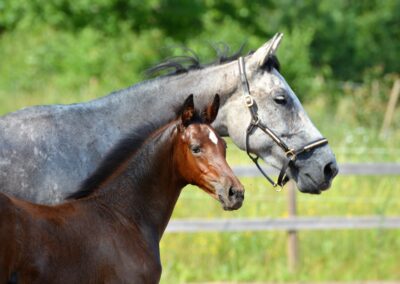 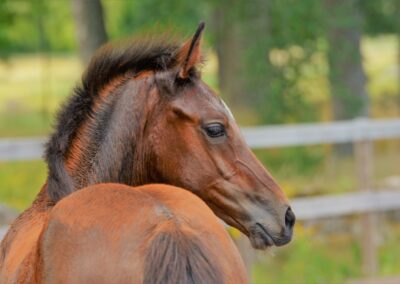 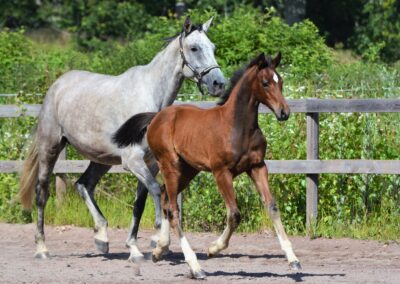 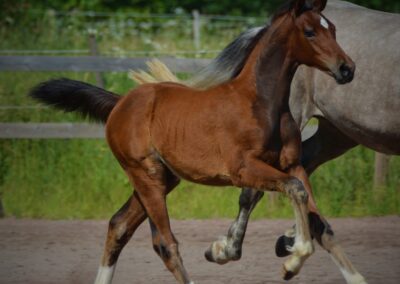 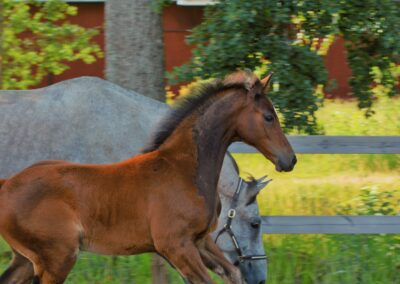 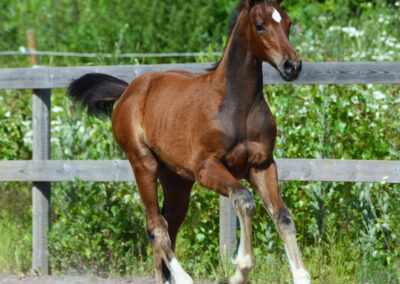 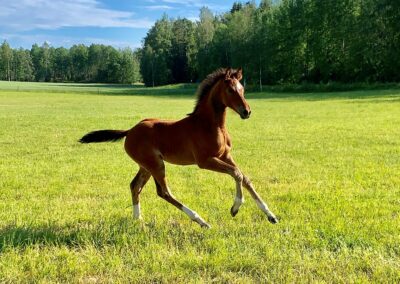 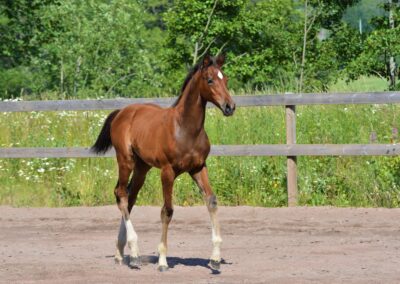 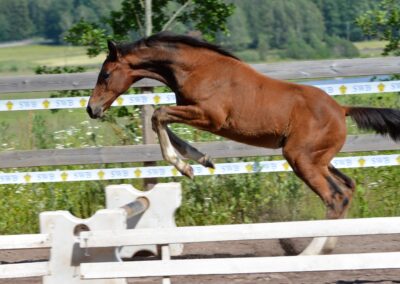 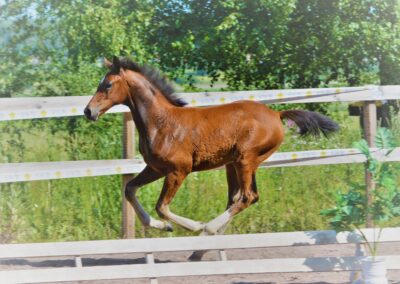 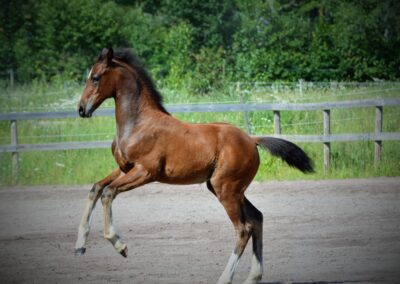 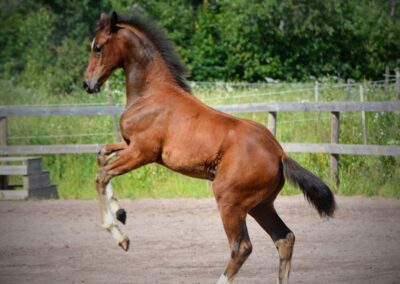 What is a Silent Auction?

Bids in the Silent Auction are given in writing. Upon arrival to the SWB Warm Hearts event everyone will receive a unique number to be used in the bidding process. The foals are represented by a table each where a host at each table will guide you through the process. Lists are placed on the tables where the bids will be written down throughout the evening all the while enjoying good food and drinks and a bit of entertainment. A bid is given in writing within a stated time during the event. Bids are given in Swedish kroner (SEK). A stated, written bid on the list is binding for the bidder. A winning bid shall be documented within 30 minutes with a purchase agreement between Buyer and Seller.

Bidding by proxy is accepted by establishing the right to do so at the bidding.

Starting price and lowest bid when the bidding starts is 150 000 SEK (one hundred and fifty thousand Swedish kronor).

The Sellers are VAT registered and a VAT of 25 % will be added to the winning bid.

In case of a dispute regarding the winning bid before a purchase agreement has been signed, the Seller has the right to decide whether the sale shall continue or not.

Tickets for the event can be purchased HERE!

SWB in association with